This small scroll is one of the two Silver Scrolls, which contain the oldest known copies of biblical passages. Written about 600 BC, they were discovered in 1979 in Jerusalem at a place outside the Old City known as Ketef Hinnom. The Hebrew language text on the scrolls is taken from Numbers 6:24-26, which reads, "May Yahweh bless you and keep you; May Yahweh cause his face to shine upon you and grant you peace." The smaller of the two scrolls, which is the one pictured here, is about 1.5" long, and the larger one is about 4" long. Both scrolls are now located in the Israel Museum. Click "Read more" below to see a close-up of the location the Scrolls were discovered. 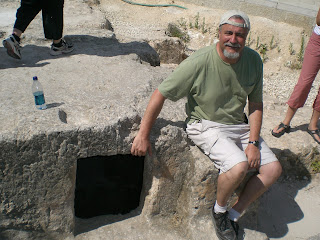 Close-up of the opening into the tomb in which the Silver Scrolls were found.