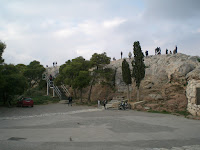 View of Mars Hill, also called the "Areopagus," in Athens, Greece. The Bible reads, "Paul then stood up in the meeting of the Areopagus and said: “People of Athens! I see that in every way you are very religious...." (Acts 17:22 NIV). Mars Hill (the Areopagus) is located next to the Acropolis in the center of Athens, and it appears to have originally had a building on it in which the Areopagus council met (the building is now gone). Paul likely gave his speech before the Areopagus council in the building on this hill, or perhaps in another building in which the  council met (e.g. Royal Stoa). Today there is a plaque on the side of the hill, and this plaque contains the text of Paul's speech. The full plaque can be read in modern Greek by clicking "Read more" below and enlarging the photo. 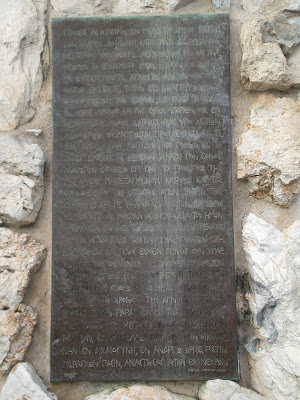