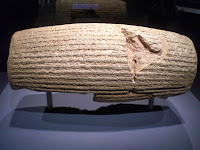 This artifact, known as the Cyrus Cylinder, was discovered in Babylon in 1879. Using the Akkadian language in cuneiform script, it recounts the exploits of the Persian King Cyrus, who is referred to frequently in the Bible (e.g. Isaiah 40-55). The text contains a description of Cyrus returning captives to their homeland. This is similar to Cyrus' actions with the Jews, though they are not specifically mentioned on this artifact. The cylinder is made of clay and is about nine inches long. The artifact was fashioned in the 6th century BC and now resides in the British Museum. In 2013 it toured 5 cities in the US, and the photo shown here was taken at the Asian Art Museum in San Francisco. The reverse side of the object can be seen by clicking "Read more" below. 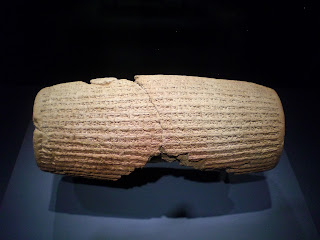