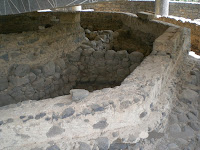 This photo displays the location of a first-century AD house in the village of Capernaum that archaeological evidence indicates was quite likely the home of the Apostle Peter with whom Jesus may have lived (Mark 1 and 2). The miracle during which a paralyzed man was lowered through the roof likely occurred at this location. Excavations were carried out on the site between 1968 and 1998, and it was learned that it was used early in the Christian era as a church and as a place of pilgrimage. Also, inscriptions that refer to Jesus Christ were found. Today the structure is still visible under a larger modern church that was built over it to commemorate the site. To see a photo of this modern church, click  "Read more" below. 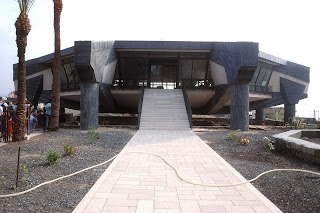